“The average dog is a nice person than an average person.”– Andy Rooney. And most of the dog lovers will agree to this. Being, cute, adorable and immensely loving, all at the same time is a job only sited to the dogs. So, the first thing to appeal about a dog breed is, its cuteness. One may not be wrong in saying that all dogs are cute in more than one ways. All have those beautiful puppy eyes and a delightfully wagging tail. But let’s have a peek into the Top 15 Cutest Dog Breeds of all times.

The enormously cute giant or the St. Bernard is a working dog breed from the Alps of Switzerland, France and Italy. This breed is known for its incredible giant yet dear features. From a big and dark mouth and an immensely long tongue, to a huge body with great fur, a St. Bernard definitely stands out in the dog crowd. A Bernard can weigh from 60-120 kilograms and stand 70-90 centimeters tall. Despite the big size, these dogs are as mischievous as a puppy. Dog tantrums and laziness are breed traits. Interestingly, these also make them feature in the list of the Cutest Dogs.

A Golden Retriever is the life of every owner’s home. His cuteness is one of the major reasons for this. With a light coat, puppy-eyes and a gentle humor, these dogs are the cutest and the sweetest ever. The gentle coat also adds an up-society glam to these dogs and make them look the best even when they are in their naughty-best.

The Labrador Retriever or simply Labrador, is a retriever-gun dog breed. These could be termed as the first ever dog breed to become synonymous to ‘cute’ and ‘adorable’. Labras are known to be the naughtiest and most disobedient dog breeds. However, they are also employed in large numbers with police and the army. Movies such as the Old Yeller, Quill, Marley And Me and Far From Home have featured the Labras in the lead. The reason of course is the cute face, mischievous tactics and extreme agility.

Shiba Inu is a hunting breed from Japan. It is known for its agililty and quickness. In addition, it is a beautiful and innocent-looking Spitz dog. Remeber the dog in Hachi- A Dog’s Tale? Yes, that dog breed is a Shiba Inu. Like the Siberian Husky, people often confuse Inu as a fox. In fact, like the Huskies, Inus are great howl-singers as well. 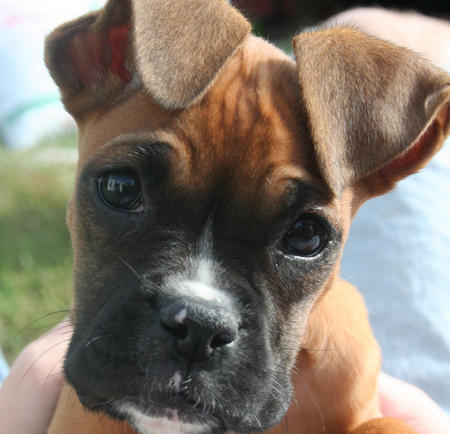 The picture is proof, as to why this handsome boy made it to the Cutest Dog Breeds list. Boxers are generally seen as serious and dull dogs. This is because they are seen as training dogs for special forces such as the deployed armies. However, not many have seen the fun side of this dog breed. Just like other breeds, Boxers are known to be whimsically cheerful and sometimes frisky.

Just like the Saint Bernard, Great Dane is another giant breed on the Cutest Dog Breed’s list. With a lean body, big flappy ears and endearing eyes, great dane is one of the cutest dog breeds to own. Apart from the cuteness, these dogs are also known for being extremely stubborn and adamant. Being grumpy and showing doggie tantrums are this breed’s famous traits.

A Chow-Chow looks like a hybrid of a lion and teddy that came live. Combining the cuteness of those two, a Chow-Chow always grabs a lot of attention. A great fur and chubby body, especially the face with tiny eyes and nose make the most adorable features. In addition, the tiny tale that melts everybody’s heart with just a wag, is one of the highlights.

These white angels are one of the Cutest Dog Breeds. With the dense fur and the ever-so lively temperament, these dogs offer the best cuddles and past-times. You can spend an entire evening watching these fur balls. Mostly, the playful and zealous, so you can never have a dull moment with a Samoyed around. Check out social media platforms for the same.

Don’t we all just love Beagles? These mischief-makers and cute-charmers make a sure entry into the Cutest Dog List. Most often, Beagles are the first choice for Airport Security and Police Security Dog Squads. This is due to the fact that they are extremely and efficiently agile and good at their job. Apart from that, they make cute pets to own and spend time with. Picture is proof!

Akin to the Frenchies, are the Boston Terriers. It is a small dog breed, packed with much needed naughtiness and cuteness. They may be the most active and laziest of all, both at the same time You can never judge them. But, as an owner, you can just sit back and watch them performing their cute tactics. They have flooded Instagram pages with such videos.

Contrary to the picture, it is a rare scene to see a Bull Dog so active. Generally, it takes a lot of patience and effort to move these lazy beings. Small body-type with a small face makes Bull Dog feature on the Cutest Dog Breeds’ list. Apart from being cute, they are incredible impeccable. Once you are around this breed, you can’t get your eyes off the cuteness. They make a huge trend at major social media platforms.

These cute little angles are sure to make you go “awwww”. Tiny eyes and a cute fur makes these handy dogs as the most favorite pets all around the globe. However much, these dogs have their own set of tantrums. Only Yorkshire Terrier-owners would know the effort that goes into making these dogs obey commands. But the cute and adorable faces will melt your ire and make it worth all the effort.

We have always loved Poodle dogs. All the glam dogs in children’s cartoon, have to belong to the breed of the Poodle. It is as if, the poodle is synonymous to a high-society dog breed. In addition to the glam tag ,these dogs are the cutest in the lot too. Known for their curly fur and innocent face, these  breeds are the light in every dog fashion show

Another dog breed to have been a huge internet sensation is, the French Bulldog. Commonly know as a Frenchie is the top most popular dog breed in USA and UK. All colors from gray, black and brown, these small puppy dogs are the cutest you will ever find. A tiny face with big eyes and a low-pitched bark melts hearts with the drop of a hat. The Frenchies are domestic dog breeds that need constant human contact. Interestingly, Frenchies should not be left alone for more than a few hours. This is because these dogs are prone to separation anxiety if left alone for too long.

01- Now, the Cutest Dog Breed of all times, The Siberian Husky-

The most trending and cutest breed on all social media platforms is the Siberian Husky. A thick fur with double coat, erect triangular ears, and distinctive markings are the trademarks of these Russian-origin dogs. Known for their gray-blue eyes, wolf-like appearances and the high-pitched howls, these are sure to make you go “awww” with their cuteness overloaded.There is never a dull moment with a husky around. Be it a puppy or a dog, Huskies are known to be playful as well as high-spirited. They are not only good with kids around, but are gentle in their own way. You will find several funny-and-cute videos featuring huskies online. Most of these will feature huskies in their own fun element.